The Mid-Autumn Day falls on September 13 (the 15th day of the 8th month according to the Chinese lunar calendar) this year, and the three-day public holiday will be offered from September 13 to 15, during which, various recreational activities will be organized in Wuhan.
Guide:
- Recommended activities & places
- What you should notice

The Yangtze River Light Show, a traditional activity in Wuhan during the holidays, will return with an up-to-date version during the upcoming festival. From September 12 to October 8, various lights will illuminate both banks of the Yangtze River and the Han River from 7 p.m. to 10 p.m..
"The big buildings on the banks of the Yangtze River, the banks of the Yangtze River, the Guishan TV Tower, the bridges over the Yangtze River are all the best places to see this show," said the organizer of the event.
International circus show
The upgraded international circus show restarted on September 7, bringing stunning performances to children in Wuhan.
In addition to the acrobatics receiving tumultuous applause from children in June, the performances collected from Shandong, Anhui and He’nan provinces will bring more fun. It is  exciting that acrobats hailing from Kazakhstan, Ukraine and Colombia will stage their stunts.
The show will last from this Saturday (September 7) to October 7, totaling 25 performances. Discounted tickets (excluding the 80-yuan tickets) with 70% off are available before September 6 on the official WeChat store of “武汉杂技厅”, or you can also call : 027-85799884/85798990 for ticket booking. >>more
Drama
On September 5th, the 6th Wuhan International Theater Festival was inaugurated. By December, 34 pieces from 7 countries, including Japan, England, France and the Netherlands, will be staged with more than 50 performances at the Zhongnan Theater. >>more
Jingzhou Fantawild Oriental Heritage Theme Park
The much-anticipated Jingzhou Fantawild Oriental Heritage Theme Park, located in Ji’nan Ecological Tourism Zone, Jinghzou, is going to open to the public on September 12.
The person in charge of the theme park introduced that, in the park, there are projects friendly to the elders and the young at the same time. It is a satisfactory destination for family travel. One-person-one-ticket system is adopted in the park, ranging from 199 yuan to 280 yuan. No more charge will be required for the amusement projects with tickets.
Now, anyone who interested could book tickets for the opening day (140 yuan/person) with 50%-off discount and 428 yuan for two persons on the Mid-Autumn Festival, via the official channels (App: 方特旅游; Wechat official accounts: “方特旅游” and “荆州方特东方神画”; T-mall). Both the two special tickets are limited to 5,000 sets, respectively. >>more
Sport events
In addition to the 2019 FIBA Basketball World Cup, the 44th World Team Bridge Championship will open on September 14, gathering 96 teams from 42 countries in Wuhan.
The games of 2019 FIBA Basketball World Cup in Wuhan area will raise the curtain on August 31. This year, 32 global teams will participate in the event, which will take place in eight Chinese cities from August 31 through September 15. >> more

The 44th World Bridge Team Championships and the 12th World Transnational Open Teams will be held at the Wuhan International Convention Center of Wuhan, from September 14 to 28, 2019. The event consists of 5 competitions, including Bermuda Bowl, Venice Cup, D’Orsi Senior Bowl, Mixed National Teams and Transnational Open Teams, which will attract more than 700 top players from 42 countries around the world. >>more
Exhibitions
From August 1 to October 6, an exhibition of photos taken by 5 veterans will be presented at the Jianghan Guan Museum while in September and October, the Museum of the Chinese Revolution of 1911 will offer an exhibition on the means of transportation of the city of Wuhan.
Horizon Shopping Center and Qingchuan Pavilion will also be exhibiting during these two months. The Wuhan Salon and the Optical Valley Science and Technology Conference and Exhibition Center will hold animated exhibitions.

What you should notice
1. Yellow Crane Tower requires advance online ticket
Visitors who want to go to the Yellow Crane Tower scenic spot during the Mid-Autumn Day (September 13th-15th) and National Day (October 1st-7th) holidays must book online tickets in advance. From September 10, the tickets are available on the official microblog account, official website, Taobao and other official channels. Real-name registration is required while booking the tickets. How to book? Click HERE
2. Wuhan issues 500,000 free tickets for countryside tour
Wuhan Municipal Culture and Tourism Bureau issued 500,000 free tickets of 23 scenic spots to the public at the second Wuhan Rural Tourism Festival which will last until September 30. Anyone interested can reserve tickets through the WeChat public account of the Wuhan Municipal Culture and Tourism Bureau. With prior appointment, subscribers can board the especially offered shuttle bus or enter the scenic areas with the QR code. How to book? Click HERE
3. Hubei Provincial Museum launches online booking system
The Hubei Provincial Museum officially launched online booking system on August 31, which will receive the maximum of 10,000 visitors each day.Visitors must book online tickets in advance of 7 days, on the official website (http://www.hbww.org), official WeChat account, APP of China Merchants Bank and Hubei Daily WeChat account “湖北日报”. Both individual and group visitors are required to fill in personal information of 2nd-generation ID cards to reserve tickets online.
Tourists holding Hong Kong, Macao and Taiwan passes and passports must line up at the reserve channel on the spot.
All the visitors are required to enter the museum on time. A request to unsubscribe the reservation can be submitted on the website. If one misses his/her appointment for three times, online reservation will never be accessible.
4. Metro trains in Wuhan to start half an hour earlier on Mid-Autumn Day 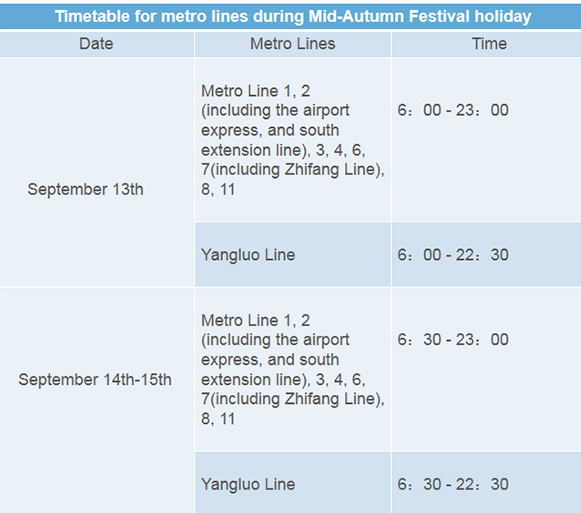